In systematic organisational development we use the barometer to establish the key focus items in relation to developing business, technical and human factors for each team or unit. These focus items are systematically implemented with the teams and fully integrated into their everyday life.

Barometer measurement of a team with very big problems, because it did not have a manager for 6 months. 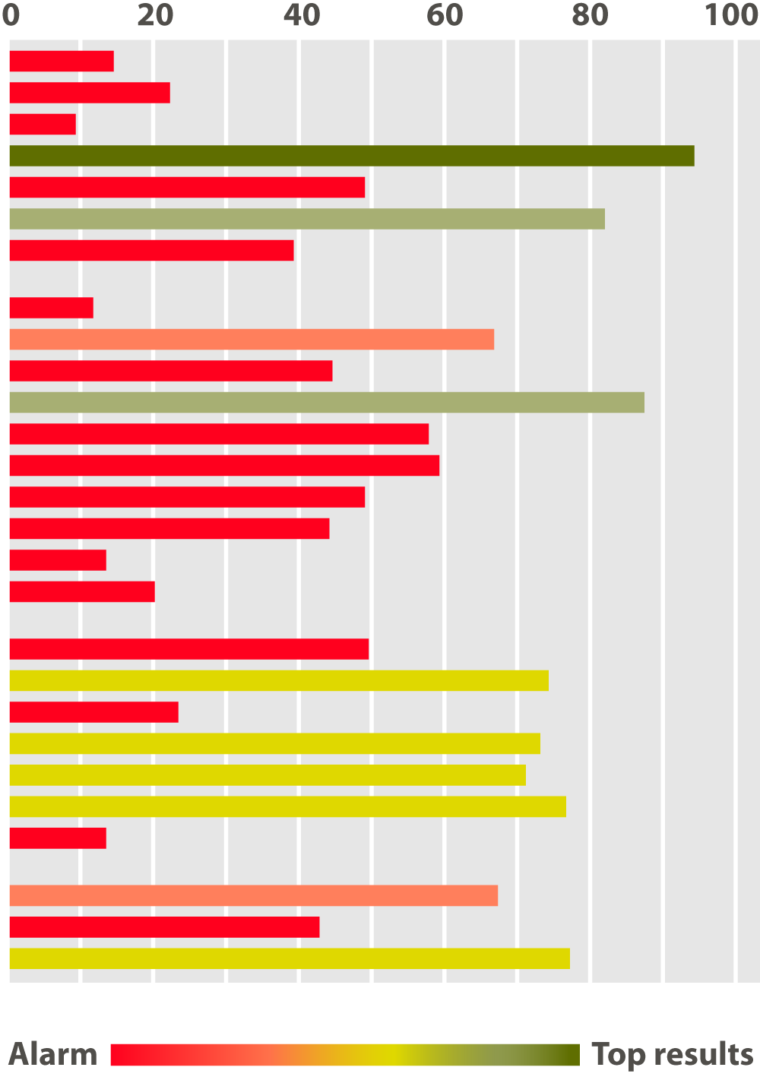 Two organisational units and their managers were in conflict for two years. They worked against each other, until a new common manager took over the whole department. We measured the situation with the barometer. The results enabled us to systematically identify and resolve numerous interlinked conflicts. We were able to establish a new working foundation for the teams, with common ground rules. Today they have regular and routine conflict management in their workplace, and the teams function very well side by side.

«I am puzzled by how long the company put up with such a constraining conflict situation.»

The new head of department of a high tech firm

The board of directors of a large company agreed on 27 objectives for the upcoming year: financial objectives, technical development objectives, objectives regarding strategic business areas, and objectives regarding the different customer segments. A very bad year resulted. Every head of department prioritized the objectives based on his or her individual view, without coordinating with their peers. There was a lot of residual disappointment and anger. Today the company focuses on a few clearly defined and measurable goals. They reflect on their progress systematically and enjoy considerable success.

«From now on, we will tolerate a maximum of 7 objectives for our unit in the next financial year, and each with clear measurement.»

CEO of a large Swiss company

A team was taken over by a new manager. He wanted to continue similarly to his predecessor, which, for several reasons, wasn’t accepted too well by his team. The situation turned from bad to worse, but the manager was not sufficiently aware. The barometer assessment clarified the status and the manager gained a full understanding of the situation. He then began to develop his own way of working with each individual and with the team as a whole.

«I was very glad that I was able to solve my management problem before my boss had to take action.»